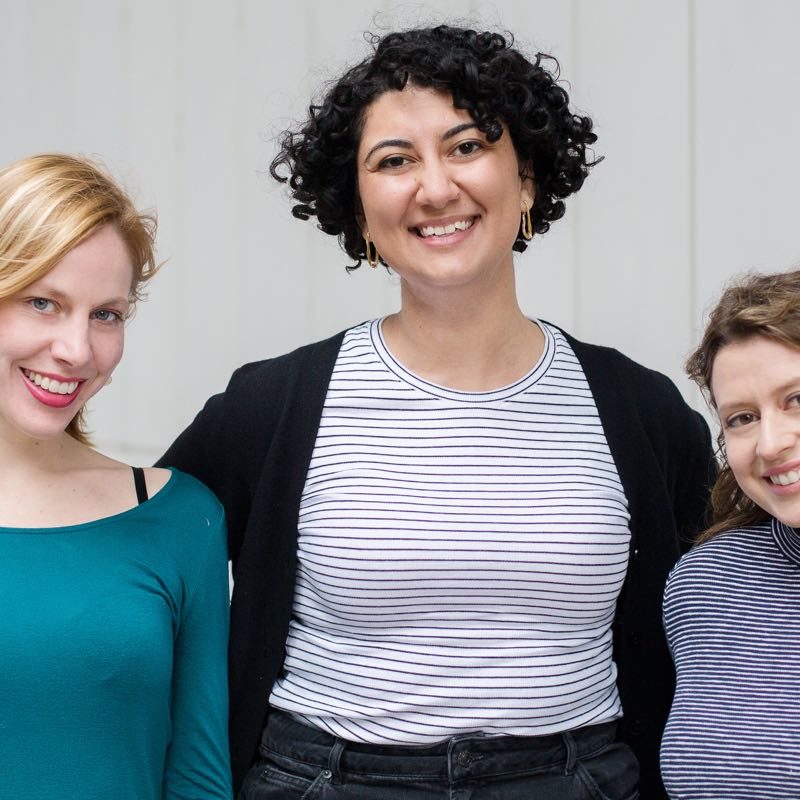 There’s a welcome example of gender parity happening at Ensemble Studio Theatre. This season, EST is producing three new plays on their mainstage—Bump, Against the Hillside, and Dido of Idaho—all of which were written by women. Playwrights Chiara Atik, Sylvia Khoury, and Abby Rosebrock all have a lot of history with EST, having participated in the theatre’s Obie Award-winning collective, Youngblood, which is designed specifically for playwrights under 30. But when it comes to their myriad accomplishments, that’s only the tip of the iceberg. Chiara’s first book, Modern Dating: A Field Guide, was published in 2013; she has also written for The Atlantic, Cosmopolitan, and Elle, among others. Abby Rosebrock received her PhD in Medieval English Literature from Columbia University, where she wrote her dissertation on marriage in Chaucer’s Canterbury Tales. Sylvia deferred medical school for three years to obtain her MFA in playwriting from The New School. Now, she is in her second year at Icahn School of Medicine at Mount Sinai, though she has taken some time off this semester to focus on her play, Against the Hillside, which is currently running at EST through February 25. We recently sat down with Chiara, Sylvia, and Abby to discuss their plays, their experiences with Youngblood/EST, and the ways in which their offstage pursuits have impacted their dramatic writing.

How did you first get involved with EST and Youngblood?

Chiara Atik: I was in it the longest. I applied when I was 25, and in a period where I wasn’t doing much theatre. Applying and getting into the group changed all of it—I went from not doing a lot of theatre to being part of a theatre community. [Youngblood] revitalized everything for me. I was in it for five years. It was an amazing opportunity for me to develop my voice. It’s a really amazing community that is still my community today.

Abby Rosebrock: I was in Youngblood for three years. This past year was my last year. I had been acting and writing for myself. I was actually in a play of Chiara’s and she suggested applying. I feel like I also learned basically how to write a play [in Youngblood]. And I got the chance to work really closely with some of my closest collaborators.

Sylvia Khoury: I had just finished my MFA and knew that I was going to start med school a few months later. I got in, and it was a big deal for me because it kept my foot in both worlds. I went straight from undergrad to my MFA to med school.

How do you balance out writing plays with going to medical school?

Sylvia: Normally, I think for a long time about something that I’m going to write, and [then go] write [the play] for a weekend.

Abby and Chiara, how did you structure your lives to achieve that balance when you first started writing? Did you have day jobs?

Abby: Right out of college, I got a teaching fellowship to do a PhD in English. I was teaching, studying, and working up the courage to be an actor.

Sylvia: So you’re already a doctor.

Chiara: I did a lot of different types of writing to pay the rent. I worked at Cosmo for a while. I was a nightlife reporter, always freelance writing, having lots of assignments, learning how to speak to the audience in lots of different kinds of writing.

Has your expository writing experience, be it academic writing or journalism, influenced your theatrical writing?

Abby: When I first started writing for the stage, I saw it as an escape from that [academic] mode of thinking, but it’s still important to develop an argument so that you’re advancing that conversation. The seemingly endless development process of taking a play to different theatres and companies is pretty essential in terms of asking a question and building an answer that moves that conversation forward, hopefully.

Chiara: As a writer who came of age during the time of social media, I learned quickly for my other work [as a freelance journalist] how to be funny and attention grabbing and concise—not that I always hit that, but I’m trying to. Here’s why you want to watch this, read this article, favorite this tweet. It’s an awareness of making my work consumable for wide audiences, an awareness of it needing to be consumable and entertaining—that’s what I always try for. As an audience member, I, in turn, have maybe a little less patience with theatre that I don’t think has taken into account the audience experience.

All three of your plays have female-driven themes or narratives, which is so fantastic. What inspired you to start writing this particular play of yours that EST is currently producing, and what has the development process been like for you?

Abby: I drafted [Dido of Idaho] my first year in Youngblood. I’ve done most of the heavy writing probably since the 2016 election. It’s almost as though I didn’t know what I was writing about until I experienced it in a larger context. The main character is struggling with her feelings for a male colleague who hasn’t been totally honest with her, and some of the mundane behaviors that they both engage in—dysfunctional behaviors, exploitive behaviors—are just a little more common than I thought, even in industries like academia. So now, I approach the rewrites with a little less ambivalence and a little less shame, because I know the protagonist is dealing with problems a lot of other people have gone through. I really wanted to write a woman who is shaped by romantic comedy, whose experiences are shaped by popular culture, and to show the underlying grief and violence and exploitation to address the problem of finding companionship and a soulmate in a sexual culture that is systematically oppressive. It was important to me to write a raucous, exciting, romantic comedy. I also wanted to expose the pain behind the contemporary love of story, to explore how a character might transcend [it].

Chiara: EST has a long partnership with the Sloan Project, which is the science grant foundation, so I wanted to try and write something scientific. I’d read a New York Times article about a man in Argentina, a mechanic, who watched a YouTube video and had this eureka moment and made this device that could help women in labor. So from there, I submitted my idea [to Sloane] for a play based on that. Essentially [Bump is] about a man in the very female world of obstetrics, trying to understand a female experience in that way. It’s a comedy about eight pregnant women and one man trying to figure out what the heck happens during pregnancy. It’s such an omnipresent, evergreen topic. It’s always going to be on someone’s mind.

Sylvia: My play [Against the Hillside] is set in two hyper-masculine worlds: the military and Pakistan, which is a very male-dominated culture. As all these men are trying to survive the circumstances they’ve been given, the women are the ones who anchor everything. I started writing it when I was at the New School, in the third year of my MFA. This production has been very cool because it’s the first time I’ve seen anything I’ve written onstage. It feels like professional baby steps in the kindest environment possible; everybody is happy to answer every question you have and talk you through it. I’m really happy my first play is being done at EST.

It sounds like there’s a really great community at EST and Youngblood that’s had a significant impact on you as writers. Can you tell me a bit about what that community was like? Did you three know each other and collaborate together in Youngblood?

Sylvia: I saw Chiara’s play Five Times in One Night. I think it was my first time at EST. I remember taking the freight elevator up and sitting on a couch surrounded by strangers. It was a warm, inviting place that did something interesting.

Chiara: I knew Abby first as an actor. She played a huge part in one of my plays that was kind of written around her. Then, she started collaborating with the director of that play as a writer. Her work was so funny, so good. Then, she joined Youngblood, and I saw lots of her stuff, and have been a fan. Sylvia and I were briefly in Youngblood together; the first play I read of hers was Against the Hillside in Group.

Sylvia: What I like about Youngblood is that you can really just say, “I would love feedback.”

Chiara: Youngblood really was, and continues to be, a community of peers whose writing you really respect. I’m learning from my peers; I want to write better, because my peers are writing this amazing stuff.

[Editor’s Note: Sylvia had to leave early to get to a rehearsal]

What about the directors you’ve met through EST? What has the experience been like collaborating with them?

Abby: I’m really excited about my director Mikhaela Mahoney. That’s a collaboration that EST facilitated and made possible. It’s been super exciting to work with her and my designers. She’s just doing exciting, essential work; it’s exhilarating to work on it.

Chira: [My director] Claudia Weill, she’s also someone I met through EST and worked with for a few years. I’m excited to do this production with her. She’s awesome. I think it’s important for the first production of both these plays [Bump and Dido of Idaho] to have a woman director at the helm. I think because mine deals with a biologically female experience, and the first production is still cementing what the play is, it’s nice to have someone with an understanding, an awareness.

Abby: Dramaturgically, since the story’s still taking shape in some ways, and since it’s very much about the female experience, it’s great to have a female director with wonderful dramaturgical instincts.

Abby: I identify as a woman writer, but I want people to hear that phrase and think blood-soaked, badass, earth-shattering. I want people to have different associations than they’ve had in the past. I want to change how people hear that phrase. The women I’ve known in my life have been forged through fire. People should recognize the strength that women are bringing to their experiences every day. I’ve gotten a lot of notes from male collaborators about the rage in my plays. I try to think that any feedback is helpful; if it reflects someone’s experience of the play, it teaches me something.

Chiara: Women, I think, are always told, “Write what you know.” Like Jo March in Little Women. “Write about your home life. You can’t possibly write about something beyond your experience.” I think women are hand-held a little more, in terms of what the play is or should be.

Do you have any advice for young women who are playwrights and might be thinking about applying to Youngblood?

Chiara: If they apply to Youngblood and get into Youngblood, it’s going to be the most amazing artistic home for them. And if they don’t get in, they’re going to find it somewhere else.

Is there anything else about your plays or your EST experience that you want to share?

Chiara: I think we’re all surprised, and really excited, to get to be in this season together. The plays go nicely together; we’re happy to be in conversation together. It’s been great. 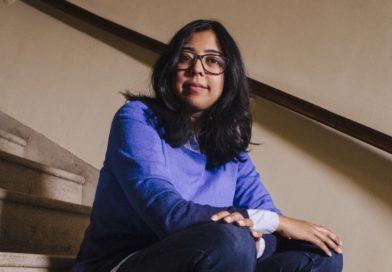 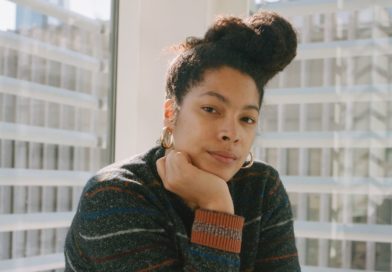 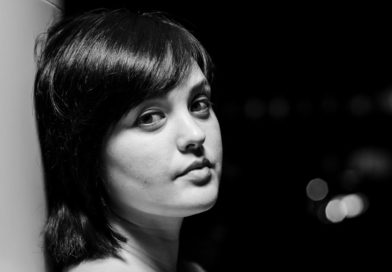 Leah Nanako Winkler on God Said This, Kentucky, and More